From “Far of the Middle: Ellington’s 1963 State Department Tour” by ‘Ehsan Khoshbakht’

The third State Department tour of the Middle East which sent Duke Ellington and His Orchestra on the bumpy roads of the troubled region became legendary mostly thanks to the Grammy winner Far East Suite, released four years after the journey. First contradiction was the name: with exception of a tune from Japan’s tour of 1964 (Ad Lib on Nippon), the rest were songs about and inspired by the Middle East.

It was a time of social and political discomfort in the States. The racial conflicts had reached a new bloody height and the tension had become explicit and outward. Just three months after global exposition of the image of police dogs attacking Afro-Americans and a cop pinning a black woman to the pavement in Birmingham , Duke was sent overseas by the State Department to spread America’s message of democracy and brotherhood to the rest of the world, ironically, through the art of African-Americans.

The Washingtonian Ellington was a natural-born ambassador, and in regard to his flawless sense of management of the orchestra, an adept politician. He was also, in John Edward Hasse’s words, “secure, self-confident, optimistic, prideful, aristocrat in demeanor, charming, well-mannered, easy with people from all walks of life, religious, ambitious, clever, didactically oriented, street smart, shrewd in business, restive with categories, stylish dresser, and a growing individualist.” Sounds very American indeed.

So the plan was set to send him over to those countries of US interest (defined, machiavellistically, between two poles of energy resource, i. e. oil, and the anti-Soviet defense) and the journey started where nowadays bloods and bombs are a daily routine: Syria.

I think so far as logistics are concerned, the tour was planned preposterously, as Ellington had to cross Iran (the heart of the Middle East) two times and fly across the whole region to get to the eastern side of it (India) and then travel back to almost where he had started the tour, as if it was treated like a cross-country, one-nighter road trip. The uncomfortable and old military airplanes used for transport, huge distances and the extreme weathers made everybody tired and sick, sooner than expected. Just imagine in November, and only in one country such as Iran, the city of Isfahan has a temperature of 15°C, while in Tehran it is colder, and in Duke’s third stop in Iran, Abadan, the temperature reaches 30°C. So even within a country, by travelling from one point to another, you change a season.

According to Ellington researcher David Palmquist, the tour was originally supposed to be 14 weeks, including the days of departure and return from/to New York, but in November, a 15th week was added for a tour of Yugoslavia. However, the Ankara and later concerts were cancelled when President Kennedy was murdered and the band arrived back in New York on November 28.

Duke Ellington and His Orchestra left New York City on September 6, 1963 for Damascus in Syria, with the connection flight from Rome.

What follows is a pictorial reminiscing of that journey which continued for more that two months.

According to David Palmquist, the band arrived at 2 a.m. the morning of November 5 having left Karachi at midnight. The concert held in November 5 was broadcasted on Iranian national TV and made Ellington “the talk of the town.”[6] Just a day after the broadcast, New York Times reported from Tehran that Ellington has condemned racial segregation in the United States and hoped for resolving the race issue in favor of black Americans. 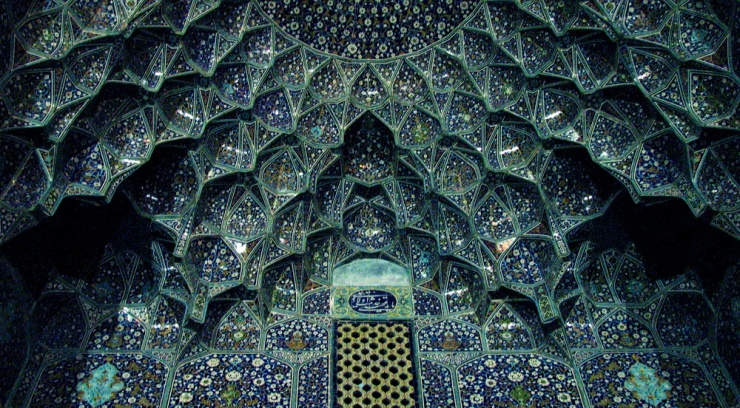 Soon after, the orchestra traveled southbound for Isfahan. But Isfahan, the most popular standard emerged from the album, had come to life at some point prior to realizing the tour of ’63 and visiting the pearl of the Middle East. According to the Far East Suite liner notes, Isfahan first appeared on a New York studio session from July 1963, three months before Ellington visited the city, and back then, obviously, it carried a different title. The exhilarating beauty if Isfahan convinced Ellington and Strayhorn for the new title. It’s the city you can name any beautiful creation after that. 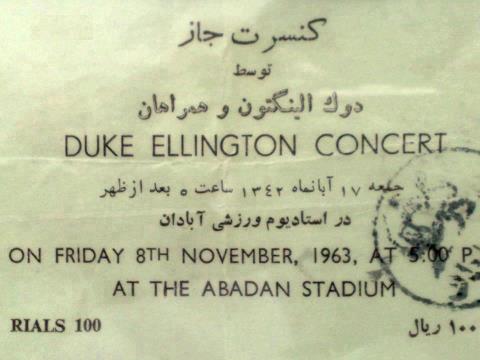 The last Iran concert had been planned for the oil city of Abadan in the southwest. In Friday, November 8, 1963, 5 PM, Duke and his orchestra appeared on sage at the Abadan’s Stadium (aka Pahlavi Stadium/Takhti Stadium or sometimes in English sources, inaccurately, Bahman Shir Stadium which is actually the name of the street, not the venue itself ), one of the oldest sport venues in Iran with 5000 seats. The admission price was 100 rials. Incidentally, the picture on the back of 100 rial bills is the image of Abadan oil refinery.

After Abadan, the road weary travelers stopped in Kuwait because due to Iran-Iraq’s political tension, no direct flight was allowed between two countries.