From “The social history of labor in the Iranian oil industry : the built environment and the making of the industrial working class (1908-1941)”

In February 1926 APOC medical director Dr. M. Young provided an assessment of the sanitary challenges facing the urban situation in Abadan:
“Even with the construction of our new lines [company housing for Indian skilled laborers] and with such modern sanitary measures as we may have taken, the position from the point of view of the outbreak and spread of disease cannot be effectively remedied unless we have the complete cooperation of the Persian authorities in Abadan Town…We must turn to the Municipality, which the Persian authorities are most anxious to develop…At the moment, the Municipality consists of individuals with no knowledge or experience of the proper conduct of municipal affairs, and with no financial means to support the municipality. I can see no good result from their work unless assisted by us with definite control behind the scenes, and also with funds. We cannot assume open control of municipal work as it is invariably misinterpreted in Tehran as interference in their internal affairs. The fact remains however, that by putting the Municipality here on its feet, we would provide the essential stimulus, and so hope in time to withdraw to our correct capacity of advisers and nothing else”[45].
The awareness that the oil company by itself was incapable of implementing effective sanitary measures and create a safe city had become evident, and so had the necessity of threading cautiously in dealing with the boundaries of sovereignty between the Iranian government institutions and the Company. The ‘target’ of concern was the “native town” of Abadan, the boomtown that had grown quickly to an estimated population of 40-60 thousand. The military language and imagery (as will become evident) often used in describing sanitary and municipal policies reflected the attitudes of both state institutions as well as the Oil Company. Given that the built environment of oil in Abadan and the Fields was already highly segregated and was on its way to becoming more so, the belligerent language simply reflected the militarized geography of oil that was taking shape in Abadan and throughout Khuzestan.
In 1909 APOC had leased the refinery land as well as the adjacent village of Braim from Sheikh Khaz’al, for £1/jerib (Chapter3). In 1914 they leased more land for the same rental[46]. Braim, initially known as “Bungalow Area”, was upwind from the refinery. The local villagers were evicted, and initially a simple structure was erected made of tin to house the handful of Europeans preparing the ground for the refinery and shipping docks. Soon after this structure was replaced by a brick bungalow (later named No.1 Bungalow). As the refinery came on line during WWI three other bungalows were added. The imported skilled laborers, mostly from Rangoon and India, lived and slept in tents and mat houses[47]. By the end of WWI most of Braim had become an exclusive expatriate community, separated from the indigenous population by the vast refinery to the south, the Shatt al-Arab River to the west, and stretches of land increasingly evacuated of population on its east flank. The European village also had an exclusive access road that was used during the 1929 labor strike to secretly transport the arrested labor strikers out of the island: “ The English had a special road called the “Braim Road”. Nobody was allowed to use it except the English and those who worked for them and they trusted. A large number of soldiers and policemen who had entered the island [to crush the labor strike] used this road to transport the prisoners in the middle of the night to Mohammareh and then onto Ahvaz”[48].
By the end of the war the Company constructed some housing for its Indian skilled workers in equally segregated areas to the east of the refinery, that came to be known as Sikh Lane and Indian Quarters (see Figure 1). The Company also had entered negotiations with Khaz’al in 1918 to take hold of a village called Bawarda, situated on the riverfront[49]. However, there had been difficulties in negotiations since suddenly land, which previously was a collective resource but not an exchange value with a market price, had now become a scarce commodity with a rapidly rising price, although the Company refused to see it that way. Percy Cox, the British Resident in the Persian Gulf, reacted to this marketization of land in 1918: “Thanks for letting me now about the purchase price of land on the right bank of the river, at £100 – £150 per acre. This is too much compared to the lease we already have from the Sheikh of Mohammareh on Abadan [refinery land], which is £1 per Jerib (1909 and 1914 agreements). In 1914 we got additional land for the same rental”[50]. 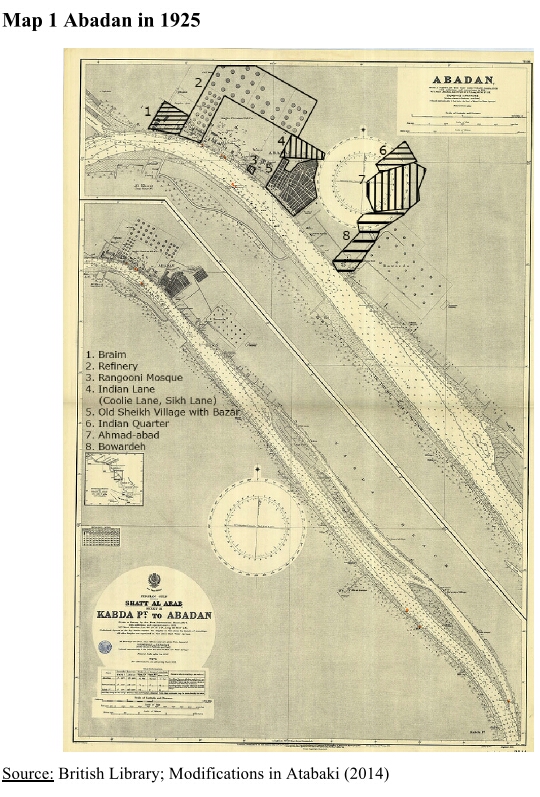 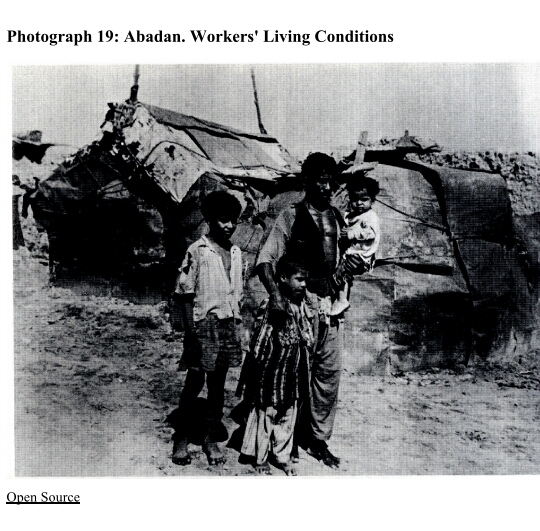 Wilson corresponded with Harold Homan, an American assistant to Millspaugh, who was acting as Provincial Director of Finance for Khuzestan, to offer Company financial assistance of an annual £2,500 for shoring up a functioning municipality in Abadan[61]. It was clear from the proposal of financial and practical assistance that it was conditional, and the Company expected to have an active say so in setting the parameters of urban change in the city. Foremost in their list of conditions was for the Government to confirm the Company’s acquisition of a significant neighborhood adjacent to the refinery for building a modern bazaar, as well as its extensive plans to take over significant new parcels of land on the Island for developing exclusive Company areas.
Since the virulent epidemic outbreaks of 1923 the Company had resolved to confront the sanitary situation head on. It had brought in professional rat catchers from India, who managed to destroy 12,000 rats between April and July 1924. It began building brick and steel huts for its “10,000 permanent workers”[62] (mostly skilled Indians) in India Lane and Sikh Lane, isolated well away from “the native Town”. The challenging problem of drainage in the waterlogged island, where subsoil water stood at 2 feet below surface began to be addressed by pumps. A piped water supply was being completed for the new Indian workers’ quarters from the river Bahmanshir, 6 kms away. The water was transported to a large reservoir to be treated chemically and piped to standalone pumps in “the [Indian] workers’ village”, or the area that became known as the “Indian Quarter”. “The Company is also planning a site for a new town, and the inhabitants of the old are being encouraged to remove to it. A piped water supply has been led to this site also. Everything possible is, therefore, being done to keep out cholera as well as plague”[63]. Garbage disposal was another area rigorously attended to, “with large number of sweepers temporarily employed to keep Company areas well swept”. In Masjed Soleyman, “Owing to the strictest sanitary discipline and constant supervision and inspection by trained sanitary squads, both European and Persian, the incidence of disease has been small. One of the reasons for this is the abundance of incinerators for destroying garbage and refuse. Scattered all over the fields one finds lengths of 17 inch piping, into one of which the refuse is
tipped, and at the other a very large jet of gas… Squads are employed in nothing else but this, and the incinerators are constantly at work, complete destruction of rubbish taking about 15 minutes” [64].
However, few of these measures, publicized by Dr Neligan in the medical journal The Lancet, or Squadron Leader Cooper at the Royal Asiatic Society, had been actually aimed at improving conditions in the so-called “Persian Village” in Abadan, “… aside from the erection of 7 water points”. The purified piped water supply was for the Braim, the hospital, and the segregated living quarters of clerks, shift engineers, artisans, and Chittagonians (skilled Indian workers from Burma)[65]. The same held true for the critically important sewage system. In Braim “all programmed sewers are working…each bungalow has a septic tank. Six water flush native latrines will be built in the area”. A rigorous plan was in place for “the new village” being erected for skilled workers to “convert all latrines to water flush system. Collecting tanks have been constructed, and the outlet pipes laid, and pumps arranged. The system needs electricity to start. As this is a matter of urgency the electrical department have arranged to give a temporary line within the next month”[66]. The fact that the water flush sewage system carried the untreated filth to the river where the rest of the Island, as well as the indigenous population downstream along the delta relied on the river for irrigation and drinking water was not considered relevant.
The Company was not unaware that ignoring the indigenous city was highly risky and planned to add more water points and piping, and to build a bridge over the creek that separated the Shahr from the refinery to facilitate access for workers coming to work at the refinery. However, the Company’s plan also involved major projects to clear out the population from several strategic areas in order to remake a
cordon sanitaire that could be more easily monitored and controlled: “Other 19261927 proposals include…building a roadway through the center of one of the most unsanitary areas…connecting the proposed bazaar site to the proposed customs site”[67].
Oil capitalism had created a new built environment in Khuzestan for the accumulation of capital in oil, by the dispossession of the local agrarian and tribal societies. This process had transformed the geography and social lives of the local population and created nightmarish urban landscapes of destitution, immense inequality, and industrial and human filth. Company officials were blaming the victims for the unhygienic conditions that had accompanied this new political economy, and constantly reminded themselves and anyone who cared to listen of the civilizing work they were undertaking: “… it [should be] realized that 10,000 natives are employed in the fields alone, and that not one of these has even an elementary knowledge of the principles of sanitation, the danger from infections and contagious diseases is very great”[68].

44. Ibid. See chapter 4 for the emergence of parallel and similar ideas in Britain about poverty and the poor quality of military recruits following the Boer War.

49. “The land we wish to take up is situated a little below a place called ‘Barwairda’; one square mile; to set up a jetty and extension to lead dangerous oil away from the refinery”. A.T.Wilson to Percy Cox, 2 June 1918, BP 68779

51. These were later incorporated in the remarkable collection that is John Gordon Lorimer, Gazetteer of the Persian Gulf, Oman and Central Arabia, 6 vols. (Gerrards Cross, Buckinghamshire, Eng.: Archive Editions, 1986). See also the selected and briefer version incorporated in Adamec, Historical Gazetteer of Iran.

53.For the criminalization of resistance to enclosures of common rights to land in Britain see Douglas Hay, “Property, Authority, and the Criminal Law,” ed. Douglas Hay, et.al. (New York: Pantheon, 1976), 17–64.

70. Much as they had been in the fast-industrializing European cities of the 19th century. See chapter 4. For a historical view of how cities came to be categorized as ‘chemical systems’ by scientific experts utilizing categories of filth, waste, and pollution, among others, see Christopher Hamlin, “The City as a Chemical System? The Chemist as Urban Environmental Professional in France and Britain, 17801880,” Journal of Urban History 33, no. 5 (2007): 702–28.

76. On the extent of smuggling in Abadan, who was involved, the extent of the collusion of state officials, and its impact on municipal tax revenues see “Illegal activities of border guards (counterfeit labels, illicit and diluted alcoholic drinks, smuggling of alcohol without banderol, etc.)” 1930-1932, INA 240008497; “Assessing the tax revenues of Khuzestan; consequences of the reduction of revenues from alcoholic drinks and state lands”, 1927-1929, INA 240010128