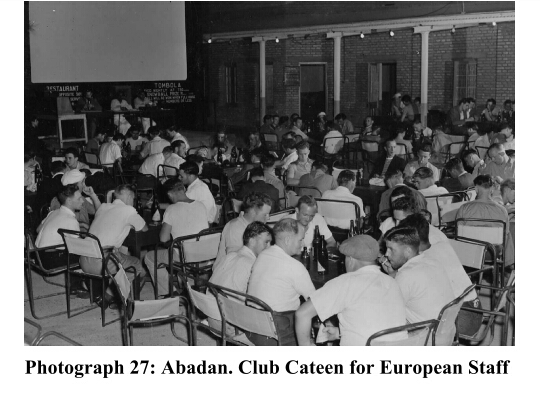 From “The social history of labor in the Iranian oil industry : the built environment and the making of the industrial working class (1908-1941)”

Place is a social construct that both constitutes and is constituted by social relations (see chapter 1). The production of place and the interpretation of its meanings are equally contested processes. People and institutions struggle over defining, using, and shaping space and place according to their individual and collective interests. We have been discussing how the APOC built Khuzestan’s oil towns and the architectural and design rational behind it. I have argued that this rational was both utilitarian, as well as a discursive exercise of power. The Company wanted to attract and maintain a labor force that would be at the same time competent, efficient, modern, and submissive. However, there has always been a fragile balance between the power of the Company over place, and its own clear lack of autonomy from both global markets, as well as domestic and local dynamics. On closer scrutiny we have seen that the structured coherence of this industrial landscape has always been shaky and open to contestation.
Company towns of the twentieth century, have been designed by using two contradictory as well as complementary principles: the idea of general welfare and the assimilation of the labor force into the generic values of the “middle class”, and, on the other hand, the praxis of colonialism, both internal and external, in the form of a one-sided domination over an alien and weaker region and people, for the main
purpose of extracting natural resources and human abilities[70]. Contrary to the first principle, the aim of colonial social planning is not necessarily to integrate and standardize the subjugated region and people into a larger unit (national, for example), but rather to create and proliferate its internal divisions, differences, and distinctions in order to better control and dominate it.
The presence of both these principles could be detected in Abadan and Masjed-Soleyman. These cities were built in isolated regions, away from any significant centers of urban population. Various planned aspects of the urban design of the Company enclaves intended to instill among its employees new norms of work, and appropriate principles and behaviors that conformed to the needs of modern industry and capital accumulation in oil. Even though the Oil Company was not a “colonial power” per se, nevertheless it made free use of colonial practices and techniques of urban planning, as well as relying on principles of industrial management and corporate welfare policies. The standard of living, the available social services and urban amenities, the level of education and technical training, and the overall urban culture of Masjed-Soleyman and Abadan began to exceed the rest of the country from the 1930s, although acute social and spatial inequalities continued and became increasingly politicized and an unsustainable liability.
In Abadan the spontaneous growth of Shahr or the indigenous city, created an alternative geography outside the socially engineered confines of the Company enclaves. Characterized by a high population density of mostly destitute and displaced people from across southern Iran, the “native city” as Company officials called it, was characterized by a hodgepodge of dwelling types, shops, stalls, bazaars, “informal” residential and commercial neighborhoods, illegal hovels and shanties, and especially forbidden places housing brothels, drug sellers, and smugglers who made the most out of the city’s location on the border.
These subversive places grew adjacent to the manicured lawns and hedges of fancy Company neighborhoods such as Braim and Bawardeh. Workers’ squatter neighborhoods like Abolhassan, Ahmadabad, and Karun had grown next to formal Company compounds with posh Persian names such as Pirouz (Victorious), Bahar (Spring), and Farahabad (Refreshing). The “public” spaces of the formal Company enclaves were confined to clubs, athletic fields, Company stores, and urban amenities that only employees of the Company could access. In contrast, the informal Abadan Town and squatter neighborhoods were crisscrossed with winding alleys and constant urban confusion and hubbub, teeming with pedestrians, peddlers, and people until the small hours of the dawn. Despite its poverty, the Shahr presented a lively, heterogeneous, unruly, sometimes dangerous, and unsupervised public arena to all denizens of the city, whether employed by the Company or not. The two cities confronted each other with striking contrasts: the formal city was affluent, comfortable, ordered, and staid. It was shaped by disciplinary powers of separation, distinction, ranking, and surveillance that kept its residents under relentless control. The spontaneous and informal city was impoverished and destitute, but had a relatively untrammeled public life, in the more conventional sense of the word. It was open, integrated, public and, at the same time, quite hectic and anarchic.[71] In these “free zones”, which did not belong to the Oil Company and laid outside its control and surveillance, all manner of people inevitably worked, cohabited, and mixed together: villagers and tribesmen, Arabs, Lurs, Bakhtiyaris, Turks, Isfahanis, oilworkers, political activits, prostitutes, policement and bureaucrats, sailors, merchants, smugglers, men and women, rich and poor, etc. The majority of oil workers also lived in the Shahr and outside Company enclaves. A third of the population of the Shahr and some sixty per cent of residents of the notorious
Ahmadabad were Company employees in the interwar years. In other words, the Company’s efforts to mold and create an ideal workforce through its spatial designs, was consistently subverted as a result of contamination by these adjoining, visible, and accessible “free zones”. As a result of the co-presence of alternative places, the tight and controlled cast of the planned Company enclaves was continuously broken, making Abadan a lively and cosmopolitan place with a strong sense of identity. No matter how powerful the Oil Company and its economic resources and organizational abilities were, it could not in the end manage to impose a full hegemony upon the place it had created. Spontaneous civil institutions, informal networks of trade, guild, and subversive politics, religious and ethnic activities, always remained prominent features of the City.

71. I have discussed the dynamics of public space in Kaveh Ehsani, “The Politics of Public Space in Tehran,” City and Society, under review 2015. The public space in Khuzestan’s company towns cannot be considered as genuinely “public”, as they were owned and controlled by the company. If urban life in these towns broke out of the rigid straightjacket of company control, it was due to the formation of autonomous and truly public spaces within the informal sectors of the city.

My Tweets
Join 615 other subscribers